I first used VMWare workstation as a development tool somewhere around 20003. It was a cost effective way to test the software I was working on against quirks of different operating systems. On one linux desktop I could have all my development tools, including a few Windows95 installations.
So, now you're asking - "what does that have to do with  clouds?" Well, no much yet.

For my current project (Crowbar) I found myself needing a setup that includes:


Oh, and the mix changes at least twice weekly if not a bit more.
That list is probably a bit too long (though if I was more thorough it would take 2 pages). Imagine how would you build that? How much would it cost to setup? How many cables would you have to run down to make a change?

The most relevant quote I could find (thanks google) , is from Walter Chrysler:

"Whenever there is a hard job to be done I assign it to a lazy man; he is sure to find an easy way of doing it."


And I am lazy. And VMWare ESXi is a great solution for lazy people... standing up a new server by cloning an existing one is so much easier than racking one up and running all the cables (not to mention the paperwork to buy it). Making networking changes is a cinch too - just create the appropriate virtual switch and add  virtual NIC's on that network to all the machines that need access.

Here's a simplified setup, and some notes: 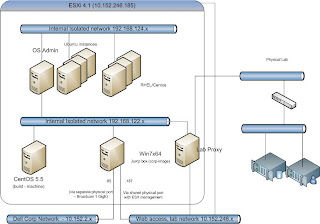 A few observations and attempts to provide logic to the madness:

ESX configuration
The test VM's are configured with the equivalent of a AWS tiny to small instances (i.e.1-2 Gb RAM, 2 virtual cores) depending on their workloads. The actual development VM's are beefier, more like a large (7 Gb RAM, 4 cores).
The server is configured with 2 resources pools - one for "Access" and one for pretty much everything else. The intent is to ensure that whatever crazy things are going on in the test VM's (anyone ever peg a CPU @100% for a bit?), I can keep working.

As was famously said - clouds still run on metal ... so here are the metal specs:

With this hardware I've been running up to 12 VM's, and being somewhat productive. My biggest complaint is about Disk IO performance, especially seeing that DVD sized images fly all over the place. To solve that, I'll be migrating this setup to a Dell PEC 2100 box, with 12 spindles configured in a RAID 1E setup.

But is it a cloud?

Some of the popular definitions for cloud involve the following criteria:


For the desktop sized cloud, money is not a factor. so scratch that.
Since I pretty much configure ESX at will, I think I get a check on the "on-demand" aspect. Yes, I mostly use the vCenter user interface, nothing as snazzy as the AWS API's. In previous life I've used the VMWare SDK (the perl version), and was pretty happy with the results. Its just that most of the changes to the environment fall into too many buckets to justify spending the time trying to automate them
Now, my current server is far from having unlimited resources....but unless you deal with abstract math - there  is no real unlimited-ness. What actually matters is the ratio of:  "how much I need" to "how much I have".  The oceans are bounded, but if all you need is a few tea cups worth of water, you're probably comfortable considering the ocean an unlimited resource.
Opps... back to servers. Over the past few weeks, I've been taking snapshots of performance metrics. CPU utilization is around 50%, Disk capacity is < 30%. Memory is my current barrier, around 80%.
If I needed to double the size of my virtual setup today, I could probably do that. The physical resources are pretty limited, but the head room they afford me is making me think oceans.
This is by no means AWS scale. But, I think I'll still name my server "cloudi - the friendly desktop mini-cloud"

Popular posts from this blog

June 23, 2017
Or, How architecting in the cloud is different  When designing cloud scale always on system, system architects are expected to be experienced in core system requirements - scale, security and high availability. By this day and age, this art is pretty well understood. The public cloud is a great help in driving solutions to those core concerns by providing the hard-to-acquire and hard-to-build foundational elements: Apparently infinite amount of compute and storage capacity for scale Fine grained control at the network and API level for security Fault zone isolation in the form of independent zones and regions for HA However, the tax the cloud imposes on these building blocks, even if not apparent at first, is its own complexity. If you don't consider the pricing models for the underlying building blocks and misapply them the tax is converted to $'s. Here are a few examples from recent design mishaps I've witnessed. An expensive scaling story: What with a
Read more

Why is this blog so UGLY

May 29, 2015
AND, hard to read to boot. The short answer: intentionally. The rumor: because I can't create a decent UX even if my life depended on it. (Dont believe it). So why so ugly and hard to read? Stats and Tracking, and selective user targeting. Lots of people will read the site with the catchy headline, picture rich and attractive looking pages. I do that while waiting in the checkout line, and looking for something to pass the time with.  The marketing industry got a name for it - ClickBait . I however am not looking for clicks. I'm looking to find which ideas resonate with people. I'm looking to see which entries get passed hand to hand and have an escalated readership. So, I keep it ugly intentionally. If you tend to judge books by their cover, please move on. Ugly cover here. Please move off this page in < 5 seconds as to not skew my stats. If on the other hand, you find the ideas intriguing, by all means, drop me a note, sing me a song or just enjoy and c
Read more

Or,  How to retain fiscal sanity and control over cloud usage The humdrum of Lean, Agility, Cloud and Devops converging has been in the air for a while now. Sometimes it feels like teenagers on prom night discussing their upcoming exploits - many talk about it, some fumble around experimenting, and few are actually doing anything with it. $ per hour... The affinity between the movements is evident - minimize upfront investment until value is proven, while ensuring you can grown your investment and capacity as this occurs. Lean applies it to the business model, Agile to the development process and the combination of DevOps powered by "resources at the point of the mouse" of the public cloud bring it to resource provisioning. The mixture of DevOps and public cloud produce this mixture that allows companies such as AirBnB to prove their business and scale it up. There's one big fly in this otherwise delicious soup - the bean counters. They want to be able to exer
Read more